The New Balance Of Work And Fatherhood Post Covid 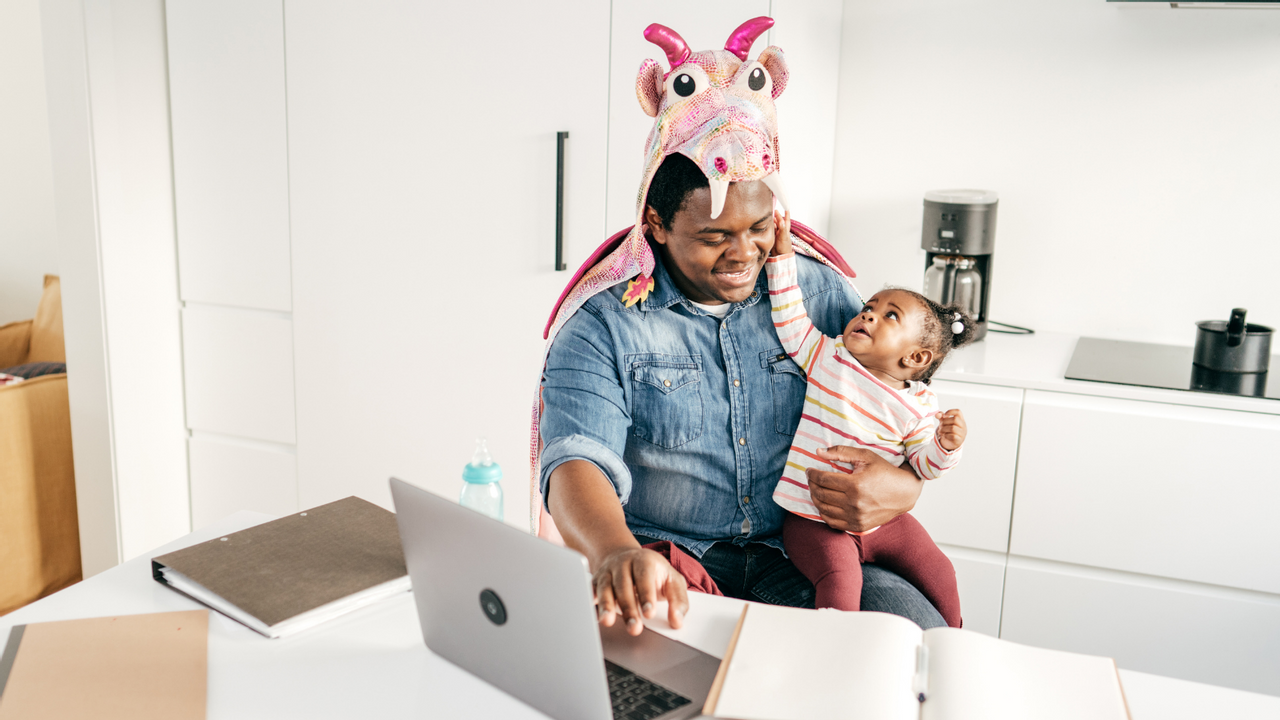 As we recently celebrated Father’s Day across Europe, now is a perfect time to shine a light on how Covid has fundamentally changed dads' attitudes and expectations about how to balance work and fatherhood.

The pandemic led to Dads doing more at home than ever before. Despite difficult circumstances, they built better relationships with their children and took on more unpaid domestic work. Crucially, many are now looking for hybrid working options to protect their wellbeing and connections with their families.

The challenges of fatherhood

Becoming a dad for the first time is probably the single biggest and most emotionally difficult transition in a man’s life. New fatherhood comes with a sense of higher purpose and a challenge around anxiety, stress, and performance at work.

Pulled in different directions by their needs and desires to provide economical and emotional stability, it’s not surprising that new dad depression is twice the general population's rate, with 10% of expectant first-time dads becoming depressed.

What do dads say they want?

In their 30th anniversary report “State of Man” GQ magazine’s readers identified ‘Being a present father’ as the number one aspect of modern masculinity. Men I work with talk about being ‘the father they don’t remember growing up.’ Dads in my Facebook group have shared these responses when asked about the 3 biggest outcomes they want from being a dad:

Men also want the opportunity to access flexible or remote working and be more involved parents without experiencing the missed opportunities and discrimination they see their female colleagues face.

Even before the pandemic, research by insurance company Zurich and the UK government-backed think tank 'The Behavioural Insights Team' found that many more men also applied for roles when they offered flexible working options, suggesting the issue is just as important for them as it is for female candidates.

The impact of Covid

In the UK, the Office for National Statistics found that the first Covid lockdown had led to a 58% increase in childcare undertaken by men. While women still did more childcare, the gender care gap narrowed.

The truth is that despite increases in men’s unpaid work, the burden of domestic activity has fallen more heavily on women, who have done even more than usual. As the Financial Times also reported:

"Women aged 35 to 49 were involved with about double the childcare hours than men in July and August, according to an EU-wide survey. A similar difference was reported for cooking and housework.”

Not only that, but women with young children are much more likely to be considering leaving the workplace altogether. McKinsey reported that in the category of parents of kids under ten, the rate at which women in this group were considering leaving was ten per cent higher than for men.

The Financial Times article also reported that this trend is seen at senior levels too:

“Senior-level women were 1.5 times more likely than men to think about downshifting their careers or leaving the workforce because of Covid-19.”

However, the pandemic proved that it was possible to work remotely on a far greater scale than anyone imagined, opening up conversations about balancing work and fatherhood in a way never before seen.

"I’ve worked in a male-dominated industry for 15 years and, finally, my male colleagues mention their children at work. This is a huge positive,” said Sally from Lausanne, Switzerland.

Why does championing dads at work really matter in 2021?

Fatherhood is tough, especially in the early days. Dads have always expressed a desire to be more actively involved in family life. The pandemic has shown that, for many office-based workers,it is possible to work flexibly and remotely and still produce desired business outcomes. 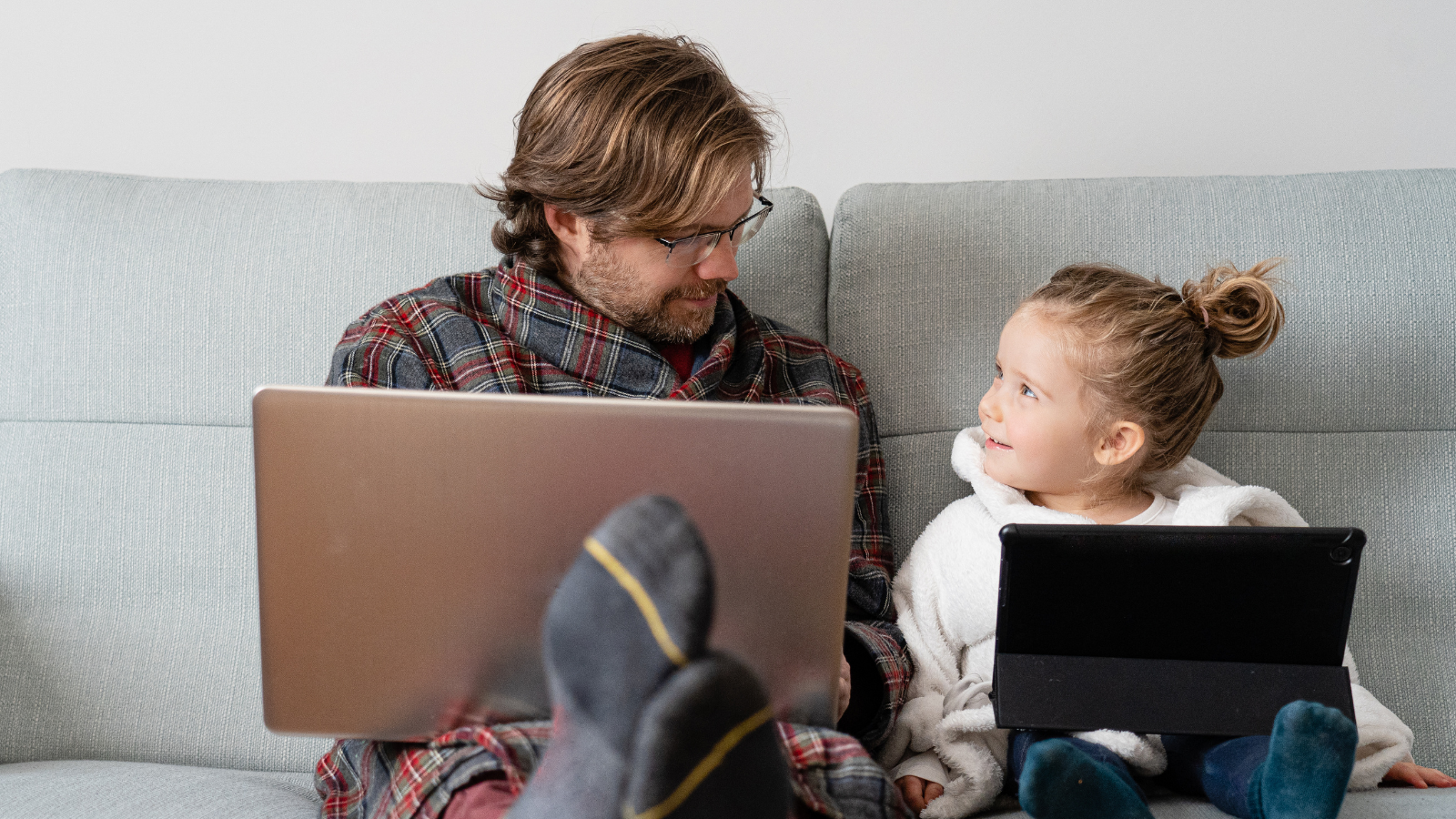 Not only that, dads report improved mental health and better relationships with their families. The Fatherhood Institute Report – Lockdown Dads the Untold Story found that 65% of ‘partnered’ fathers “reported better father-child relationship following lockdown, rising to 73% among those who were full-time at home.”

As The Guardian reports, Dads have realised what they have been missing out on:

"If he’d been working his usual hours, he would have missed his son’s first giggle already. “That stopped me in my tracks,” he says. “I want these initial things. I want to see his first steps. I want his first words.”

It makes sense that happier dads will perform better at work and have better mental health, but supporting dads is also a route to gender equality.

Women are facing a pandemic jobs crisis, but they have also always faced inequalities in the home. The reality for many working mums is that paid work is followed by a “second shift” of unpaid housework and an emotionally demanding mental load. The UN estimates that globally 75% of unpaid labour is carried out by women (about 3 times as much as men).

Opportunities for men to be more involved at home need to be seen through both mental health and gender equality lenses. As the Harvard Business Review pointed out - equality starts at home:

“Women with equal partners at home are more successful at work. When people are less concerned with the impact of their job on family responsibilities and able to focus and commit more fully to their work, it’s no surprise that they’re more productive and able to take advantage of growth and advancement opportunities.”

A major mechanism for supporting wellbeing and gender equality is flexible and remote working. Long before the pandemic, the signs were there.

In January 2019, the LinkedIn Global Talent Trends report found that 75 per cent of UK hiring professionals said that offering flexible working will be ‘very or extremely important’ in the future.

The genie is out of the bottle.

The action we need to take

The increase in paid paternity leave in Switzerland from 1 day to 10 days in 2021 is an important milestone in the support for dads and families, but it needs to be seen in the context of broader cultural change.

Japan, for instance, has some of the best paternity leave on offer in the OECD but only an estimated 6% of men take any leave.

If businesses are going to use the pandemic as an opportunity to improve mental health, well-being, gender equality, and ultimately performance, then these five things need to be done:

Taking it seriously matters. Otherwise, your staff might just go and work for a business that recognises that the world has changed.

At Thriving Talent, we help organisations to engage and retain working parents and carers during parental leave and other life transitions. To learn more and download a brochure, click here.

Stay connected with news and updates!

Join our mailing list to receive the latest news and updates from our team.
Don't worry, your information will not be shared.

Stay connected with the latest news and articles!

How employers can easily foster a culture of caring & career Jul 01, 2022
Are you meeting your employees' expectations? Jul 01, 2022
Diversity And Inclusion Strategy: Working Parent Programmes To Retain And Engage Employees May 19, 2022

Our story Meet the team Work with us Get in touch

Please enter your first name and best email address and we will keep you posted of our latest news and articles. View our full Privacy Policy.